Biševo Island is a small island east of the larger island of Vis. It can be reached by boat or by ferries or small boats that bring tourists back and forth from the island of Vis. The ferries mainly stop at the port of Porto Mezzo, where the tourists disembark and come back, other boats instead go around the caves of the island of Biševo. in Porto Mezzo there are restaurants, bathing establishments and a small tourist agglomeration. It is difficult to anchor ahead of Porto Mezzo due to a series of prohibitions, I recommend that you take a buoy to safely moor your boat and avoid getting in the way of the ferry. Also in the eastern part of the island there are some beautiful bays, one of these is Luca bay where you can anchor and safely.

The caves of the island of Biševo

In Italian Biševo is said Busi is a Dalmatian term of Venetian origin which means holes. Buso is also used as a term in Bologna and indicates a hole. The plural busi means holes, hence the name perhaps the island of holes. Is this perhaps because there are many holes on the island with its indented coast? I don’t know, but I do know that there are some caves on the island of Busi.

Biševo is an island near the island of Vis, a destination for many tourists precisely because there is a very famous cave called the Blue Grotto. I remember that, when I returned there, it was completely fenced off by floating buoys which prevented access from the sea. To visit the Blue Grotto you had to do it only with a guided tour using small boats that enter and exit quickly at a cost of about € 15 per person.

It is also dangerous to swim inside the cave, due to the series of boats entering and exiting alongside. Perhaps it is better to visit the cave during sunset where there is less passage of tourist boats, but you could miss the wonderful game of reflections that enter the cave during the day.

Near the Blue Grotto it is forbidden to anchor with the boat, certainly in August when I was there. Some guys on a rubber dinghy with Port Authority t-shirts approached and told us that it was forbidden to anchor, even if there is no prohibition on the cartography.

The second cave is the cave near the Tresjavac Bay, much more recognizable from the sea, because it is very wide. You will surely see it and you will have no difficulty in recognizing it. I advise you to anchor halfway between the two caves and not too close to the coast, the seabed is not very good and goes down quickly, as often happens in Croatia. In the second cave you can enter with your tires, I advise you to be careful of the engine and the sharp and sharp rocks that are inside the cave, they could cut the tubulars of your tender. You will notice that the cave is very large indeed. Inside the cave there is also a small pebble beach covered by the sea with some rocks.

Other articles on my blog:

Fri Jan 21 , 2022
The privacy notice Privacy Warning: This network is blocking encrypted DNS traffic This warning message appears on 10.5 “iPad Pro devices with version 15.1. This warning does not appear on other devices updated to 15.2 and connected to the same network. What does the notice mean? The alert notifies you that you are on a […] 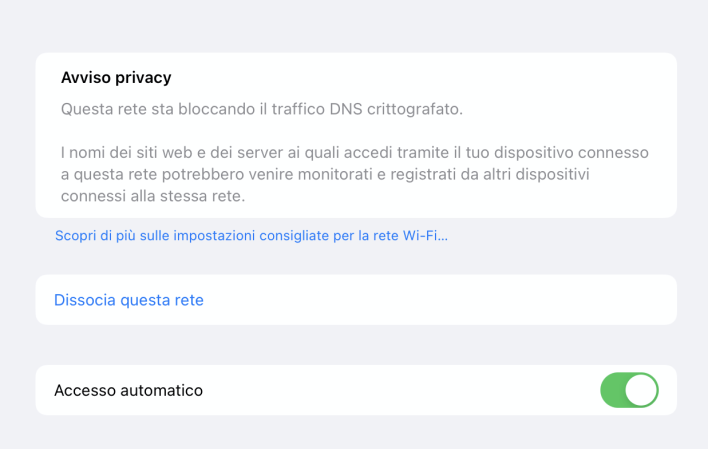