We came from Ustica, the Ustica auctioneer. We left the Ustica marina early in the morning and set the sails in such a way that we could make a nice, light and fluid navigation. There was a

beautiful sea breeze that allowed us to sail with a Yankee, sling and mainsail. During our navigation we also freed a turtle from a red plastic net, where perhaps it was actually finding

refreshment, under the shadow that it probably projected and we saw two other sea turtles. We sailed for a long time, about three hours sailing, then we turned the engine slightly to increase speed. We’ve been spotting Alicudi for about thirty miles … he was there, hidden by the light haze on the horizon … peeking out from the sea, like a triangle of rock silhouetted in the blue.

We got down there in the afternoon, around five. Immediately below, we realized that the island is very landslide, so much so that we saw a lot of goats that climbed along the ridges, interspersed with landslide lines. We also witnessed a slight frank from the top, perhaps caused by some goats, the dust has risen over the top. Arriving from Ustica, we see the part of the West that is definitely uninhabited and arid, at least landslide and decidedly uninhabitable. I noticed a black hole in the center, which they say is the devil’s cave. On this cave they then told us, that the previous priest of the island, a former war priest who had made the Russian campaign, had let himself fall inside and had, with a ritual, exorcised the devil and finally the he had chased away from the island of Alicudi, with the happiness of the whole population.

We kept the island on the port side, on our left and passing under what is called the Tonnara, we approached the buoy camp, to present ourselves in front of the village that rises from the sea almost above the top of the island.

There the good Simon was waiting for us, good boy, whose number is +39 334 5305872. Simone manages the buoy field in front of BAR Airone, he immediately assisted us with a wooden lance, he passed the dead body of the buoy and there he passed our mooring line. Once stopped, we did the usual rituals of switching off and securing the boat and we immediately dived to take a bath. Unfortunately there were several jellyfish and we were very careful not to get hitched, but unfortunately there were also individual strands, suspended in the water ..

After swimming, in the evening, just before sunset, my friend Pier came to see me on board, accompanied by two islanders who have a little singer on the island, who told us a little about the island and they were really very hospitable with us. Our owner landed with them while we finished all the procedures, we closed the boat and went out with our tender too. We arrived at the port and welcomed three children who were fishing laughing and happy. After that, we took two beers from the bar just in front of the jetty and went to eat at Silvio, one of the island’s fishermen.

Passing through the houses of other people, step by step, we finally entered Silvio’s house, which made us eat in a spectacular way. I guess I haven’t eaten so well and so much for at least two years. We first ate a pasta with tuna eggs that still makes me the chill in my mouth (it’s 9 am and I would go back to Alicudi now, but I think we’ll be back soon this summer), then we switched to swordfish caught by day , breaded and grilled, then we ended up with a breaded and grilled moray eel. Mamma mia, what goodness … all flavored with excellent oil, chopped olives, zucchini, cucumbers and tomatoes, all with a true and natural taste, of volcanic earth, especially in tomatoes, the island exalted all its naturalness.

The fish is really good and Silvio and his wife are wonderful people, real, hospitable people. We ate with them, in practice, sitting on tables at best arranged, as if we were at home, in an impromptu barbecue between friends, in short, I felt better than at home.

I must say that Alicudi really amazed and impressed me. We went to see my friend Pier climbing up a stairway almost up to half of the island. From up there you can enjoy a fantastic view. Wonderful, you can see all the power lines, you see the other islands, like Filicudi, Vulcano, Stromboli and Panarea in the distance. What a beautiful crap, what a beautiful croaking of cicadas and what beautiful vegetation. Here you build everything, or almost everything, transporting it on a mule, especially here in Alicudi, this practice is still well-established, since you can’t do otherwise than to get a helicopter to transport the building material.

At night around 3:00 a.m. with the shouting of the only BAR that was still open, while we were watching the stars we watched the sailboat beside us, slightly distant, at least fifty yards away, start to drift away, at first we asked ourselves what was happening, afterwards it was It

was clear that theirs was still plowing or sending directly, we tried to call them at VHF, but no answer, we also tried to go and warn them with the dinghy, but nothing … in the end the boat disappeared on the horizon. We must be very careful about where and how we are still in the Aeolian Islands. Especially with a sailboat that has a certain draft of tolerance. The problem is often that being able to still give 10 meters with a boat that fishes 2 meters and forty centimeters and remain at a safe distance from the shoreline, without giving too calm is difficult, but obligatory, since when the boat should rotate towards the sea, the stillness of the anchor may no longer be so long to keep the boat anchored on the seabed, which sometimes becomes even triple in a rotating circle. Sometimes, but often it is not advisable to do it at the Aeolian islands, it would be advisable to give the summit to the ground, but since the islands are round, there are no excellent shelters and often give the summit to the ground, remaining exposed to the wind it is not advisable except for some hour of bath.

And also this morning I saw one of the most beautiful sunrises I could see, I woke up very early, at 5 a.m. since I had slept in the cockpit, under the stars. No moisture on the deckhouse thankfully and all the boats, in a total calm, had arranged themselves, at anchor, different from one another. It seemed to stand in the middle of a lake of oil. I woke up with Filicudi in front of his eyes, which stood out on the horizon.

Returning to the port after a beautiful climb to the steps of Alicudi, we were invited by a fisherman from the island and by Vito to eat excellent prawns, very good, they went away like the fries, along with a good glass of wine frozen. Unfortunately we had to hoist the sails and move away from Alicudi in the direction of Marina Capo d’Orlando to go and check the packing.

The nice thing about Alicudi is that to go to your friends’ house or simply visit, the top of the island, you have to pass through other houses or their gardens, so sometimes the owners come out, with big kindness, they offer you a drink and they welcome you at home, even just to rest a little during your ascent. They are really very hospitable unlike other islands where instead, often, you notice the repulsion towards the stranger, who passes in the garden, maybe just having the path wrong.

See you soon Alicudi, it is not said that we see each other again this year …

[VIDEO] - Dolphins between Terrasini and Ustica

Fri Aug 30 , 2019
Arriving to the island of Ustica from Terrasini in Sicily, where we left in the morning with a beautiful sailboat, around eleven o’clock morning, we came across a beautiful pack of dolphins . It was a decidedly large pack. These dolphins behaved differently from those I normally saw, perhaps more accustomed to passing ships. In […] 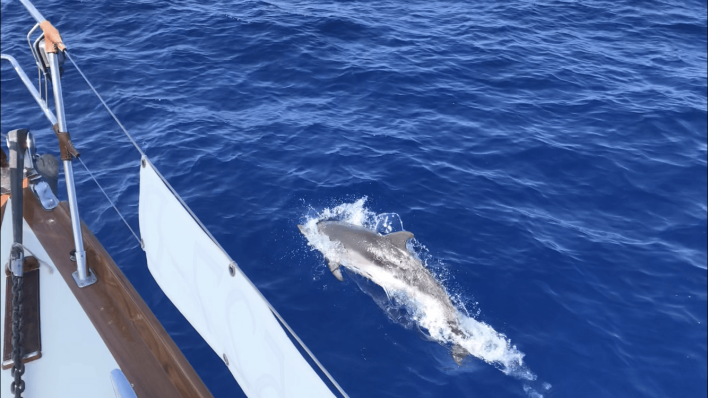