Have you ever taken on water?

Has it ever happened to you at 2 am, to wake up aboard your sailboat, sailing and putting your feet on the ground feeling wet? I think it is the worst thing you can experience, especially if you are moving or very far from the coast, which on the one hand is good, but in those moments you have little time to think about it … It has happened to me 3 times.

Some techniques to avoid or avert the sinking of your boat.

Really very interesting, the part of the video, where the boy explains how he created a bypass between the engine and his exhaust pump. Basically what he does: he uses the engine as a pump for discharging water into the sea inside the hull that could be filled due to a leak.

He disassembles the hose that comes from the seawater intake of the engine for loading the salt water and connects it with a hose, the end of which is positioned under the floorboards and uses the motor to suck the water out of the cabin. This video is also interesting because it shows the times in which the engine manages to let the water escape from the inside.

On average, in 2 minutes with the engine running without a gear engaged, in neutral, it manages to drain all the water below deck. The time obviously depends on the capacity of the engine cooling salt water intake pump that you will find indicated in the specific engine data.

Is it really possible to make a bypass between the sea cock and a flying tube in the bilge?

Years ago I learned to do it when I was with water on my knees during a transfer of a sailboat, in the Mediterranean, between Savona in Italy and Alghero in Sardinia, which is always Italian territory. They woke me up at 2 am with water to my knees and we quickly realized we had some kind of leak on board. We first tried to figure out where the flaw came from, which was not identifiable at the time. My mentor at the time explained to me how to bypass and I did it with a warm engine. It worked really well and we managed to save the boat and our skin, being 30 miles from Corsica at night, tossed about by the waves and wind of a strong storm.

Where did the water come from?

Water leaked from the door seal in the wind. During the night the boat heeled by the mistral wind with a lot of wave gave the possibility by pressure to let the water into the boat. The water had first filled the cockpit of the refrigerator, watering down the little food in it with salt water and then pouring from behind the kitchen it had first filled the bilge and then filled the boat. The bilge pump was blocked. The thing that surprised us was the amount of water that had entered during those two hours of changing the guard. There were two of us and we couldn’t help but stay at the helm, so we couldn’t control below deck. On the other hand, one of the two had to sleep. I still remember my mentor shaking me screaming that there was water in the cabin and I, who was destroyed by the steering of my shift, could not wake up. As soon as I woke up, I realized the situation and immediately put myself under the orders of my mentor who, standing at the helm, was yelling at me how to do it. Great school.

In marine jargon, the bypass to suck in the water bypassing the sea cock of the engine is called the she-wolf. It is made with a tube that fishes in the bilge. The she-wolf should be prepared previously and should also be extensible or have more openable bilge outlets. Obviously at the bottom of the pipes there must be filters to prevent anything from entering that could block the circulation of water in the engine. As long as your main engine is running, you have a chance to empty the boat in case the pumps fail. Furthermore, you must train yourself to use it and prepare your crew for what it is, where it is and how to activate it in navigation.

Do it while underway with a warm engine

Making a bypass while sailing, at night, in the dark with head lights or holding them in your mouth, with water to your knees in an emergency situation is not easy, quite the contrary. You have to know what you are doing and do it quickly and hope to be able to detach the suction tube from the sea cock, because that point is often oxidized. So I recommend that you always keep a backup hose to use in an emergency at least.

They also advise you to take an additional mechanical pump with you to get around in another way.

Always have a second backup bilge pump already connected and a backup one to replace in an emergency.

There are also balloons that can be inflated that can keep the boat on the water to prevent it from sinking.

I understand that during the transfer of a boat some of these things cannot be had, but at least identifying the sea cock of the engine and checking the condition of the hose is not bad.

It is a nice YouTube channel, created by two guys, She and Him who have been sailing around the world for 5 years.

What happens to a sailboat when it capsizes?

Survival on the sea with a life raft

Fri Oct 16 , 2020
Have you ever had to open an emergency raft at sea? Drop it from a sailboat into the water? At night? What’s more, during a strong storm? To be able to climb on it and be able to cut the line and have to wait for help, alone in the middle of the sea? Would […] 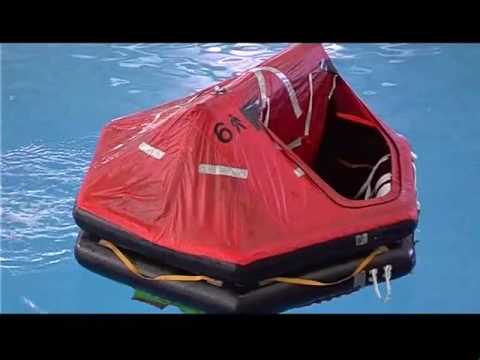