Possible an unhindered route from Russia to Pakistan? 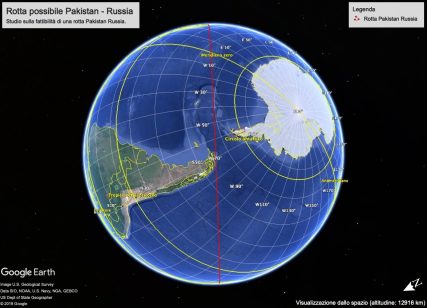 Is this route really possible?

It could be that they intend to “leave from Russia” as starting from the islands of the Andreanof islands in the Aleutian archipelago in Alaska or crashing against the Sandwich South islands or against Coronation Island.

In short, as you turn it, from the mainland of Russia, from the northern tip over the Gulf of Ozernoi, in the Kamchata up to the other side of the world in Pakistan at the height of Karachi.

It is difficult to be able to make such a route, either because of the difficulty of drawing it on Google Earth PRO, or in the event of a real attempt at navigation, due to the fact that it would pass very close to the south pole and especially under the roaring 50 ° .. in short you should sail through the most dangerous seas in the world. It would be around 19848 nautical miles. 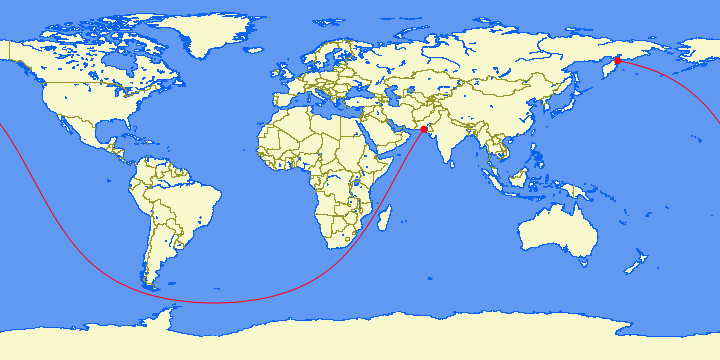 The longest straight line: you can sail almost 20,000 miles in a straight line from Pakistan to the Kamchatka Peninsula, Russia. [720×360]

Try it too, some advice

You can do it too, you could try with Google Earth PRO or with a navigation software to make the route and see if the route passes over anything, I can give you an advice, to get an easy picture of the situation, you have to use the legend of the altitudes and depths, by clicking on show elevation profile, so on the fly you can immediately see if there is a drop or a depression, in my case there was always a drop of at least 9 meters, which was given precisely by the fact that the route passed above the islands, just left or near the south pole. Also you can use the ruler tool, am when you go to use it, you will find that Google Earth PRO obviously tries to make the route less long, therefore trying to pass over the earth, but if you make a point near Coronation Island, near the pole south, you will be able to break through the pole. Be careful though, we said that the route must be straight by straight, so without changing the course angle … or of course you will have to change it in navigation, now we are not going to explain rhumb and orthodrome, in short, there must be no angles on the arc that is perhaps between the two points.

And instead it really exists … here is the solution …

I found an article that talks about the kepleronlyknows hypothesis, named after the user who in December 29, 2012 posted on Reddit the: “longest line that can be sailed on land without colliding land from Pakistan to east of Russia” by drawing what is called the strange line strange line, strange only because who does not conceive the spherical earth and who does not know the difference between rhumb lines and orthodrome. Here you can see the article, know that there is some math to do. https://arxiv.org/pdf/1804.07389.pdf

I leave you all considerations, but at the bottom of the article it is clearly written: “The authors do not recommend sailing or driving along the found paths.” That is: “the authors not recommending to sail along this route”

Longest Straight Line Paths on Water or Land on the Earth

This Is the Longest Straight Line You Could Sail

I also attach the .kml file that I found:  http://misoft.online.fr/Marine_GeoGarage/Pakistan_Siberia_GeoGarage.kml

The longest straight line: you can sail almost 20,000 miles in a straight line from Pakistan to the Kamchatka Peninsula, Russia. [720×360] from MapPorn

My name is Stephen Augustus Kleckner and I am a boy born in Riccione but raised in Genoa. I traveled a lot when I was little, so I immediately had a different view of the world from my companions. I love sailing and sailing, I have circumnavigated Italy sailing 31 times and made more than 45,000 miles by boat. I love the sea and can't do without it. I am a very curious person and I like to understand how things work. I am passionate about physics, so much so that I enrolled in university and I devour any documentation that passes under my hand. I am also a collector of stamps and LEGO. I have a vintage MINI Morris from 1964. I was a founding partner of RICCIONE TV, but unfortunately I was a wrong partner and I am a computer system analyst and analyst. I love Star Trek and I think we are on a matter Francolino shoot in a dark galaxy, so we should be much more united and loyal to the rules. I don't like extremism and hoaxes.